Wall for Westbrook: How the Point Guard Swap Affects the Wizards, Rockets, and their Path Forward 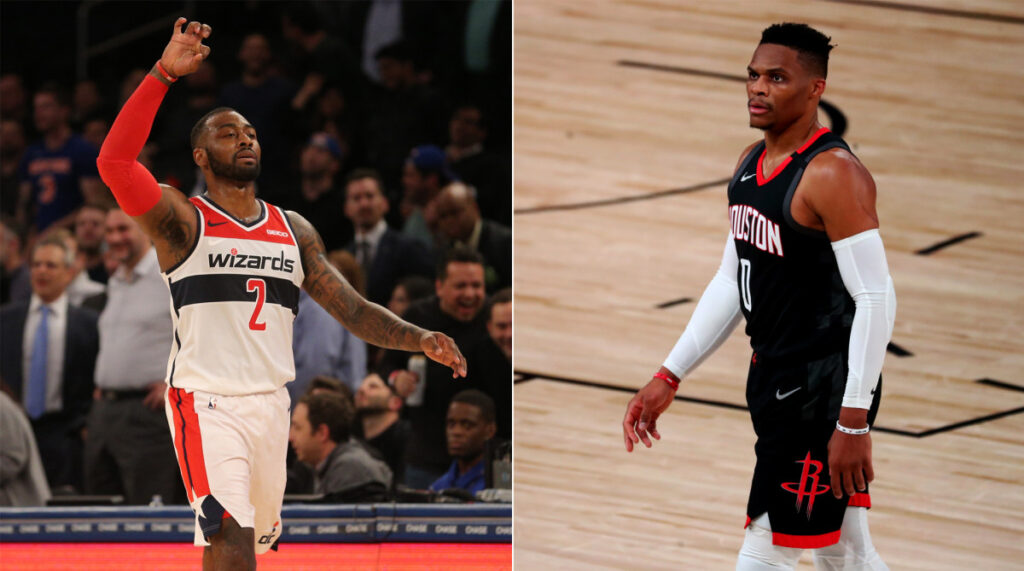 Two of the largest contracts in the NBA in terms of average annual value were dealt for one another in a trade late Wednesday night sending perennial All Star Russell Westbrook of the Houston Rockets to Washington for John Wall and a lottery protected first round pick in 2023. Talks between the two front offices reportedly stalled around the recent draft after both guards had asked to be traded, but apparently the conversation heated up earlier today and an agreement was struck. Both Wall and Westbrook will earn over $41 million this season with two more years left on their contracts after this year, so it made perfect sense that they were swapped for one another. The trade still seemed unlikely before today however because of the way it seems to affect each team’s direction forward. It was an intriguing trade that will make NBA fans wonder what is next for each team. We will analyze why the Wizards and Rockets each agreed to this trade, and how it affects the each team’s future in the playoff picture.

Why did the Wizards do it?

Wizards star guard Bradley Beal has become one of the hottest names on the trade market this past offseason. He seemed to be another great player toiling away on a bad team. As the draft and training camp started to draw closer, the Beal trade chatter seemed to die down because of his stated excitement to get back on the court with John Wall who has not played in a game since December of 2018. The Wizards were set on selling Beal on a competitive team with him and Wall at guard and young intriguing pieces around them. Suddenly word leaked that the front office allegedly had talks with Houston about a swap for Westbrook, and Wall asked to be traded soon after. The front office was put in a tough spot once their only hope for selling their star on a competitive team asked to be traded. They needed to find a deal sooner rather than later, but Wall’s supermax contract paying him $41 million, $44 million, and $47 million over the next three years would be nearly impossible to offload without attaching a lot of value. One of the very few players in the league who could match that type of contract was Russell Westbrook, but he still has real value coming off of a 3rd Team All-NBA selection this past season. Luckily Houston was motivated to move Westbrook, so Washington only needed to attach a 2023 lottery protected first round pick to Wall to add Westbrook. Things could change, but this seems like a no-brainer decision for Washington to make this deal as they try to position their team as a competitive playoff mainstay over the next couple of years to ensure they keep Bradley Beal happy. A superstar is one of the hardest things to find in the NBA, so when a team has a player like Beal that is still ascending, they need to explore every avenue to keep him.

Where do they go from here?

With Russell Westbrook slotted in the starting lineup next to Beal for this upcoming season, the Wizards seem poised to improve upon their 19–20 season and make a strong run at the playoffs. Will a playoff run be enough to keep Beal from getting a wandering eye next offseason? Several star players have had great seasons next to Westbrook over the past few years including KD in his final season with the Thunder, Paul George two seasons ago, and James Harden last season. He is a ball-dominating player, but when he gives it up he allows his teammates to make plays. The problem is each one of those players listed either left or asked to be traded. Is it a coincidence, or do stars really not like playing with Russ? After this season with Beal, we will likely know for certain. Beal could enjoy a statistically great season and the team could make the playoffs, but if he publicly or privately asks for a trade, that could be the final referendum on Westbrook’s career as a super-charged ball dominant guard who has to be the number one option on a team. Personally I think Russ is very well-liked by players around the league because of his competitive fire and take-no-prisoners attitude, but his ball-dominant style may not be the most attractive to play alongside. The Wizards are making a bet that Westbrook and Beal can be good enough to become playoff mainstays in the Eastern Conference, and Beal will want to stick around at least through the remainder of his contract. If the season starts poorly or Beal feels marginalized in the offense, he could be traded for a massive haul either during the 20–21 season or next Summer. The Wizards front office would be smart to keep a close eye on Beal as this experiment gets going.

Why did the Rockets do it?

From the outside, the Rockets as we know them seem to be unraveling. Head Coach Mike D’Antoni left first, then long time President of Basketball Operations, Daryl Morey, followed him out the door soon after. Rumors of a team rebuild started swirling, and suddenly the organization’s worst fears came to pass; Their two star players, James Harden and Russell Westbrook, wanted to be traded. Like John Wall, Westbrook is signed to an enormous contract that pays him over $41 million this season. It was not going to be easy for the Houston front office to find a trade that worked without having to give up value along with Westbrook. Although contract is onerous, he still provides value as a relentless attacker off the dribble. They did not want to offload him just to grant his wish, they needed to gain assets in return. Houston’s front office likely also knows that James Harden and Russell Westbrook are close friends, and Westbrook getting moved without netting real value in return could cause Harden to push even harder to leave. Ultimately the best decision for the front office was to find the only other available player with a contract of equal size to Westbrook’s. Swapping Westbrook for Wall means gambling that Wall is healthy enough to bring the same or close to the same level of play that Westbrook provided, while also netting a future 1st round pick for a team that had very few future assets. Houston’s front office likely wanted to hold out for more picks, but with training camp about to begin around the league they needed to act quickly. Wall’s health will ultimately determine the winner and loser of this trade.

Where do they go from here?

Unlike Washington, Houston is likely no better today than they were prior to the trade. Even when fully healthy, Westbrook and Wall were comparable players. With Wall having not played in a game since December of 2018, it would be hard to imagine that he is near that same level of play he showed prior to injury. So will James Harden be traded now that Westbrook is gone? It still seems unlikely because of the massive haul Houston would need in order to agree to a deal. Without Westbrook on the team any longer and no James Harden trade, it is hard to predict the direction of the Rockets. They are not rebuilding, as any team with James Harden will be one of the better teams in the league during the regular season. They also are not seen as serious contenders for a championship, which has to be disappointing to a superstar like Harden. Along with holdovers from last season Eric Gordon and PJ Tucker, the newly acquired John Wall will join free agent signings Christian Wood and DeMarcus Cousins to make up the core of the roster. Wall and Cousins have a well-documented friendship from their time together in college at Kentucky, but they are both coming off of multiple major injuries and there is no guarantee they will return anywhere near their former all-star abilities. Christian Wood was a highly sought after big man in free agency, but he has such a small sample size of quality play that it is hard to imagine him greatly improving the team immediately. This will truly be a prove-it season for many players on the Rockets, and in the front office. If Harden’s supporting cast shows that they can help him carry the load, he may warm up to the idea of staying in Houston throughout his contract. If Wall, Cousins, and Wood underwhelm, the rumors of a disgruntled superstar will only grow louder, and the front office may be faced with the difficult decision to part with one of the NBA’s superstars.